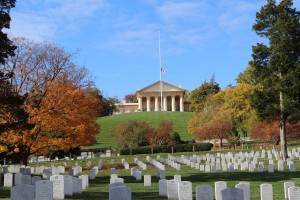 On this Veteran’s Day, I am reminded of visits to a beloved Washington DC landmark, Arlington National Cemetery. Our American heroes from the Armed Forces are buried here, sprawled across this hilly terrain on hundreds of acres. It’s very difficult to see the cemetery in one visit. Most visitors only have time to see President John F. Kennedy’s gravesite the eternal flame; or the Tomb of the Unknown Soldier. But there’s so much more.

First a little history lesson: the land on which the Arlington National Cemetery was once owned by the adopted grandson of George Washington, who himself had riverfront property overlooking the Potomac, the Mount Vernon estate.

The builder, George Washington Parke Custis, intended the mansion and its grounds as a living memorial to his adopted grandfather, the first President of the United States. Custis was Martha Washington’s biological grandson, whose father had been adopted by President George Washington upon marriage to Martha. The 1,100-acre tract of land George Washington Park Custis inherited was given the name “Arlington” after the Custis family ancestral estate in the Virginia tidewater area.

Many artifacts from George Washington’s family remain on view in the Custis mansion in the central part of the cemetery. You can tour the house and learn what life was like here, before the Civil War, when the Custis house was eventually taken over by Union soldiers. The Union Army wanted the property for it’s excellent location; and partly to upset a former resident, General Robert E. Lee, who had married the only child of George Washington Parke Custis, Mary Randolph Custis. When Lee became General of the Confederate Army, the Lee and Custis family left the house and land. The family’s slaves remained and did their best to care for the property; you can tour the slave quarters on your visit to the Custis house.

Today, two former U.S. Presidents are buried here, John F. Kennedy and William Howard Taft, alongside their wives. Kennedy’s grave burns the eternal flame, which was first lit 50 years ago after his assassination in November 2013. A wall of words from a speech made by Kennedy surrounds his gravestone. When mourners stop to pay respects, they turn to find a panoramic view of the Lincoln Memorial in direct sightline. In addition, Lincoln’s son Robert Todd Lincoln is buried here, as are President Kennedy’s brothers Robert and Edward (Teddy) Kennedy.

There are a number of women besides the Custis family with headstones in Arlington Cemetery. Not all served in the military; some played an important role in American history, like Juliet O. Hopkins, a Civil War nurse, and Mary Roberts Rinehart, America’s first war correspondent during World War I. You can visit the Women’s Armed Forces Museum at the entrance to the Cemetery to learn about how women first served in the American military during the Civil War through the duties of today’s heroic women serving in Afghanistan and Iraq.

Besides experiencing the dignity and sanctity of this hallowed ground, you will be struck by the incomparable views of Washington DC from Arlington National Cemetery. It’s a must see Washington destination.