Georgetown Waterfront Park is a fantastic spot for a picnic or a splash in the fountain. Stampede through the sprinklers, enjoy the breezes off the water, follow the green cement maze, and check out the boats and ducks sailing by. Kids love it but bring your sunscreen because there’s not much shade here.

Visit the National Building Museum to learn about the fun of building things. Kids love to play with the giant styrofoam building blocks at PlayWorkBuild Room and the Legos in The Building Zone. Don’t miss the playhouse and construction vehicles.

Inside the National Postal Museum is a stage coach like the ones used by the National Postal Service to deliver the United States mail before the extensive railroad system was established. In the Museum, kids can also sort packages, design their own stamps, write a postcard and board the historic Railway Service Car.

At the Smithsonian Air and Space Museum there are dozens of airplanes and rockets on display, as well as the Lunar Module, a vehicle that traversed across the surface of the moon. Kids can touch the “Lunar Touch Rock” Apollo 17 brought back to earth in 1972. At 17.7 pounds, it was the largest rock that the Apollo 17 crew brought back to earth.

Almost every Monday and Wednesday evening at 8 pm during the summer, pull up a chair or sit on the steps of the U.S. Capitol to listen to patriotic music played by the President’s Own Marine Band. The U.S. Air Force Band performs concerts on Tuesday nights at 8 p.m. on the West Front of the U.S. Capitol Building. All the performances are free, and no tickets are required.

6. Put your feet in the fountain at the National Gallery of Art

Everyone loves sitting in the National Gallery of Art’s Sculpture Garden surrounded by the enormous and quirky works of art spread around this colorful, shady garden. Refreshments are sold at the Pavilion Cafe. During the winter, the fountain is transformed into an ice skating rink.

Inside the National Zoo is the Amazonia Exhibit that contains plants, trees and animals native to the Amazon Rainforest. Walk through this jungle-like atmosphere and observe the magical underwater world contained in their 27,000 gallon aquarium. There is a charge for parking at the Zoo, so consider taking the Metro to Woodley Park.

Dorothy from the Wizard of Oz used her Ruby Slippers to transport her, and you can see them up close and personal at the Smithsonian Museum of American History. Kids will also be duly impressed by the giant U.S. Flag on display, that flew during the Battle of Baltimore during the War of 1812, and the new exhibit featuring the history of toys in America.

At the Smithsonian National Portrait Gallery, walk through the Hall of Presidents where you can see paintings and sculptures of every American President from George Washington to President Obama. 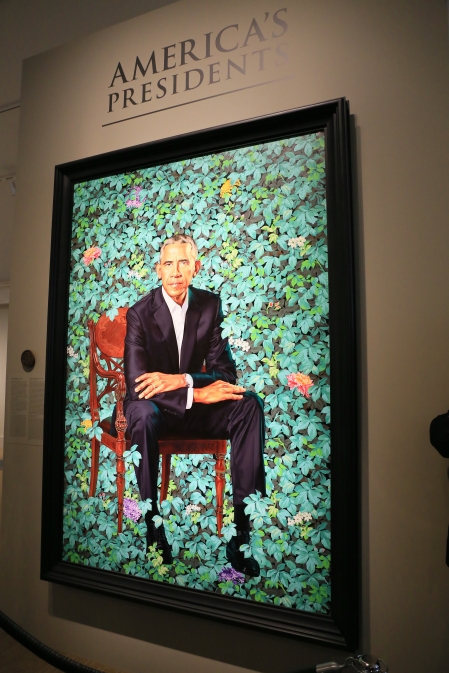 10. Feed the Giant Koi Fish at the National Arboretum