When our trees are changing colors and the breezes are picking up, it’s the perfect time to visit (or revisit) Arlington National Cemetery. People come from all over the world to pay homage to the fallen soldiers laid to rest here. 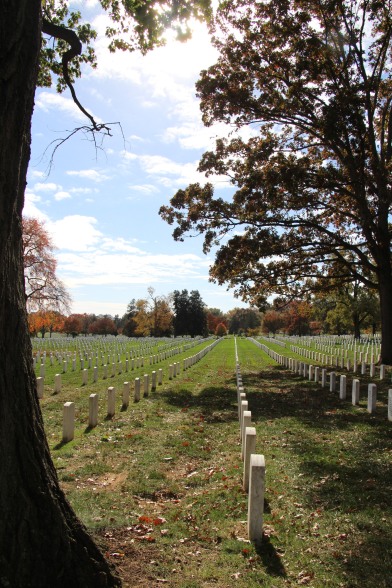 You may wonder how the cemetery come to be? It all started at Arlington House, a mansion standing on a hill on the western side of the Potomac River, overlooking Washington DC’s National Mall.

Arlington House was formerly the Custis-Lee Mansion. It was built in 1802, across from what was then “Washington City.” The builder, George Washington Parke Custis, intended the mansion as a living memorial to his adopted grandfather, George Washington. Custis’s father was Martha Washington’s biological son, who President Washington adopted upon marriage. The 1,100-acre tract of land was named “Arlington” after the Custis family ancestral estate in the Virginia tidewater area.

Custis’s only child, Mary Randolph Custis, married her distant cousin, Robert E. Lee, who joined her at Arlington House until 1861, when Virginia ratified its alliance with the Confederacy. When Lee became major general of Virginia’s military forces, he instructed Mary to leave Arlington House and take George Washington’s possessions with her. After that, the mansion was taken over by the Union side, and used as a base. The Northern army also began burying their dead there.

After the Civil War, Union Army Brigadier General Montgomery Meigs took over the grounds and transformed it into a military cemetery. Meigs commissioned a vault to house the remains of 1,800 Battle of Bull Run casualties, while the federal government turned some of property into a Freedman’s Village, where 1,100 freed slaves were given land to farm during and after the Civil War. The Custis-Lee family was reimbursed for their property many years later by the US Government.

Today, the Arlington House is a historic landmark operated by The National Park Service. It was restored to look like it did when the Custis family lived here–original furnishings and artifacts are set in place throughout the buildings; volunteers appear in costumes of the times describing each room; paintings created by family members adorn the walls, and slave quarters were transformed into a museum.

When you visit Arlington Cemetery, you may encounter a burial service, as more than 20 burials are conducted each weekday. The landscape of the cemetery is spread over 600 acres and contains 70 burial sections, as well as 38,500 columbarium (for cremated remains). Other notable landmarks on the property include the Tomb of Unknown Soldier, Memorial Amphitheater, and the Civil War Unknown Monument.

Along with many American leaders, two former U.S. Presidents are buried here, John F. Kennedy and William Howard Taft, alongside their wives. Kennedy’s grave burns the eternal flame, which was first lit 50 years ago after his assassination in November 22, 1963. A wall of words from a speech made by Kennedy surrounds his gravestone. When mourners stop to pay respects, they turn to find a panoramic view of the Lincoln Memorial in direct sightline. In addition, Lincoln’s son Robert Todd Lincoln is buried here, as are President Kennedy’s brothers Robert and Edward (Teddy) Kennedy.

Don’t miss the Women’s Memorial Museum dedicated to women who serve. The Women In Military Service For America Memorial, is the only major national memorial honoring all women who have defended America. If you have time, take a tour of the cemetery  Arlington National Cemetery Tours, Inc., which provides an interpretative tour bus service through Arlington with weekday stops to see the U.S. Marine Corps War Memorial, President John F. Kennedy gravesite, U.S. Coast Guard Memorial, U.S. Army Gen. John J. Pershing’s gravesite, Tomb of the Unknown Soldier, and Arlington House. On weekends, the tour also stops near Section 55 and 60 and the Sept. 11 Memorial.

Published by Travel and Dish

Freelance writer and photographer specializing in vivid, deeply reported stories about food, travel and family. View all posts by Travel and Dish

One Reply to “Visiting Arlington Cemetery in the Fall”