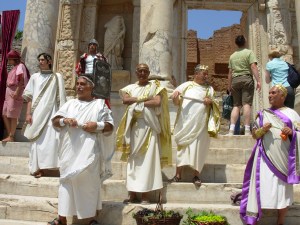 Visiting Ephesus is not unlike touring the sidewalks of Hollywood. In both places, guides point out where bygone superstars lived, worked and played. Picking through the ruins of Ephesus in Northern Turkey, a guide informs me that Cleopatra’s chariot is responsible for the ridges in the stones under my feet; an image that causes me to wobble in my sensible shoes.  Walking past various structures, like the ancient library and operating theatre, I shiver despite the searing heat. Imagining the presence of others who walked here before isn’t difficult, especially when there are actors dressed in period garb happily posing for photos all around me. Roman conquerors of Ephesus may have built these buildings thousands of years ago, but their uses were quite contemporary; innovations that persist in the modern world.

Ephesus citizens once famously welcomed Apostle John, a person who at the time created the same excitement that Brad Pitt commands when he drops by the Kodak Theatre  in LA. John visited Ephesus to spread the word of his Messiah Jesus in the enormous Ephesus amphitheatre. Thousands came to hear the Apostle speak, and the guide relays that there was great concern for his safety. According to legend, authorities kept his location shrouded in secrecy before he sprang to the stage. Today, wild grass grows in between the seats of the  amphitheatre, an architectural feat made of perfectly-cut limestone boulders.

It is believed that John brought the Virgin Mary to Ephesus to live out her final days. Her tiny home has been turned into a chapel where church masses have been delivered by two Popes. Visitors dip their hands into the stream on the property because it is rumored to have healing powers. They leave with miniature statues of the Virgin made in everything from stone to gold.

Ghosts continue to whisper their memories in this ephemeral land, not unlike the way a walk through an old movie set feels. The eras may be different, but for some, the reverence is the same.